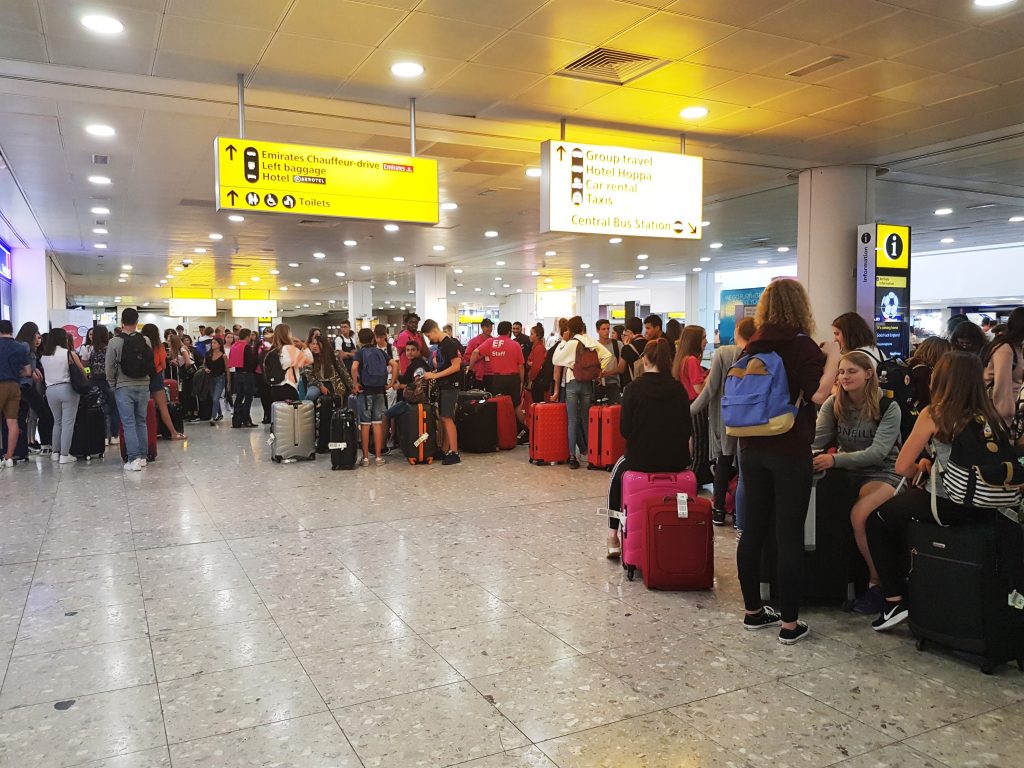 Its 11.30am in late February and after six long hours I’m seeing the final few excited teenagers, who’s hands are full of water, deodorant and toothpaste that they ‘forgot’ were in their bags, through security. Next stop for them Colorado, on their first ski trip with school.

A crazy morning of oversized suitcases, passport troubles and envious conversations with teachers about “how great the snow is out there” done for another day. It was almost impossible to imagine that in a month’s time we’d be seeing our final student through the same Terminal 3 security, who’s hands this time were holding a face mask and hand sanitizer and were showing signs not of excitement, but instead desperation to get home to their parents before we all went into lock-down.

Business stopped and everything went quiet.

We have to fast forward almost three months until I was next inside the airport. That, over the last seven years has come to be my second home. Yes! After days upon days of garden cricket, sunbathing and playing FIFA with my two best friends I was holed up with during lock-down, it was time to drive back into the Terminal 5 car park, where I’d normally spend ten minutes trying to find a space, take the lift from level three up to level five, to see departures waiting for me in all its frantic glory. People bumping into one another trying to see which zone the BA348 to Nice was checking in at, while I whisked our Unaccompanied Minor through the terminal for a coke and a cake in Caffe Nero, until the Iberia staff were ready to take them through to their flight.

What I arrived to was nothing like that; when I drove into the car park there were a scattering of cars, providing me with too many spaces to choose from. As I got to the lift and pressed the button, it arrived within seconds, as if there weren’t ten others tapping the same button on all the other floors like it was a PlayStation controller. I rode the lift alone, turned into the long walkway that separates the drop off point and the terminal and was faced with an obstacle course; not the expected one of abandoned trolleys and passengers I had become accustomed to slipping in and out of, this obstacle course was designed for our safety, to stop this evil virus from entering our airport. Automatic hand sanitizers, staff equipped with anti bac to clean trolley handles and free masks placed out in case you were short. Once through the sad but necessary course I was back in the departure’s area, it wasn’t Heathrow Terminal 5 departures, this wasn’t my second home., this was emptiness, it felt eerie almost. Only a couple of the eight zones open, no more than a handful of flights on the board and near enough the same number of passengers.

This was busiest the terminal in England, part of the second busiest airport in the world and it was empty.

The meet we did that day was a success and it felt amazing to be back working (although Nero was closed, so we missed out on the cake!). It is safe to say we certainly get an extra sense of enjoyment in helping the children manoeuvre through the trials and tribulations of the travel world when things are the way they are currently.

Another few months on from that day, after slightly less garden cricket and slightly more meals out, the airport has slowly started to refill. More people are braving the trips to seek a much-needed change of scenery, including a few of our international summer students who, thanks to the amazing efforts of some of the International Education Schools we work with, have been able to go on their planned trips when all felt doomed.

Of course, it would be silly to say that we are anywhere near back to normal. The Aviation industry is going through one of, if not the, hardest times in their history. Jobs are being cut daily and our beloved Heathrow has had to close two of its terminals. But I have every faith that they will get through it, fight to get everyone back on their flights and restore the excited traveller shaped furniture, in my home away from home.